Since the launch of the first Impreza in 1993, Subaru’s have excited petrol heads across the land and now there’s an all new beast ready to be unleashed to get us excited once again. The BRZ will launch this year and the UK specification for the extremely anticipated car has been revealed.

The top of the range BRZ will come fitted with shiny, 17 inch alloy wheels, LED daytime running lights, dual-zone climate control, MP3 connectivity and very responsible front, side, curtain and knee airbags. Whilst Subaru of course has a speed obsessed side to them, they do also like to keep their drivers safe!

Now the exciting bit. Under the bonnet the BRZ will have a 197bhp 2 litre boxer engine that will be perfect for after-market parts. There will also be a torque-sensing limited slip differential, with owners having the choice before purchasing the car of having it equipped with a six-speed manual, or a paddle operated semi-automatic gearbox.

The BRZ is particularly impressive due to the nature in which it has been designed and built. Subaru insisted on having the centre of gravity as low as possible and so half of the cars rather light 1100kg has been placed below knee level in order to improve the handling.

That, for me, is great attention to detail and shows that the designers are serious about this new offering. Whether or not it is a direct replacement for the Impreza, it certainly is going to appeal to those that enjoy modifying their cars. 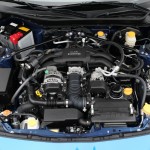 Subaru have even addressed the tuner clientele they know they will attract by stating that they will release a stripped out edition of the car. This will act as an even more focused version of the BRZ whereby tuners will be able to customise the exterior and engine as freely as they like. Those that do decide to equip their Subaru with after-market parts will have to consider their car insurance cover whilst doing so as any modifications are likely to increase the premium.

I’ve always been a fan of the old Impreza; the noise it made coupled with the way it looked was like nothing else. You could always tell when an Impreza was crawling up the road as the 4 cylinder boxer engine would rumble and burble at low revs. It truly was a one of a kind and a favourite of tuners.